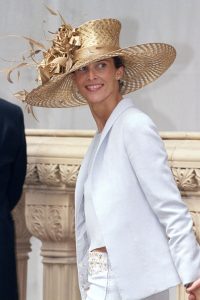 PRINCESS ROSARIO OF BULGARIA
Talk about making a statement. It looks like Princess Rosario spray painted a sun hat gold and stuck a silk flower on top for the wedding of Princess Alexia of Greece and Carlos Morales Quintana. 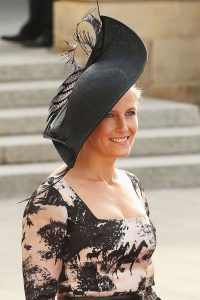 COUNTESS SOPHIE OF WESSEX
For the wedding of Prince Guillaume Of Luxembourg and Princess Stephanie, Countess Sophie of Wessex wore a black fascinator with feathers to compliment her black and white dress. 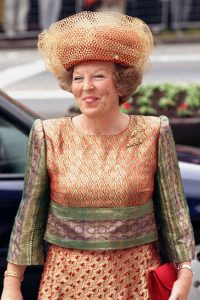 QUEEN BEATRIX
Former Queen Beatrix of the Netherlands is known for her iconic hats. For the wedding of Prince Maurits of Holland to Marilene Van Den Broek, she wore an orange pillbox piece with gold mesh on top. We give her bonus points for matching her outfit. 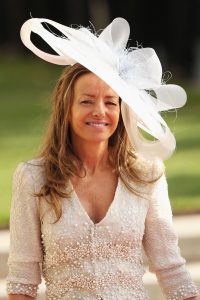 PRINCESS MIRIAM OF HUNGARY
Princess Miriam may have worn the biggest bow of all time to the wedding of Prince Guillaume of Luxembourg and Princess Stephanie of Luxembourg. When paired with a dress covered in pearls, the hat comes off as soft and sophisticated. 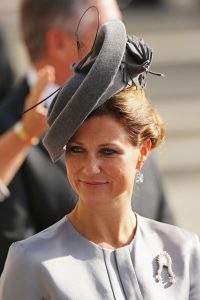 PRINCESS MARTHA LOUISE OF NORWAY
From one side of Princess Martha Louise’s hat at the wedding of Prince Guillaume of Luxembourg and Princess Stephanie of Luxembourg in 2012, it looks like she’s wearing a gray trilby. But from the other side, you can see that’s not the case at all! 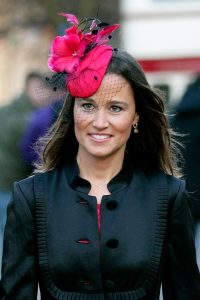 PIPPA MIDDLETON
Pippa wore a fuchsia dress and a matching cocktail hat to the wedding of Lady Katie Percy (daughter of Ralph Percy, Duke of Northumberland) and Patrick Valentine at St. Michael’s Church on February 26, 2011 in Alnwick, England. 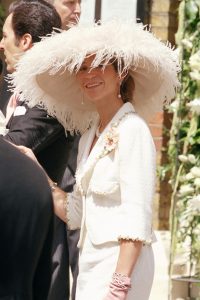 DUCHESS OF LUGO
Infanta Elena of Spain attended the wedding of Princess Alexia of Greece and Carlos Morales Quintana at the St. Sophia Cathedral in London in 1999 in a wide-brimmed hat covered in feathers. We can only imagine what guests had to say about this number. 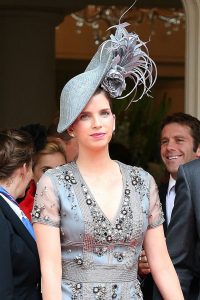 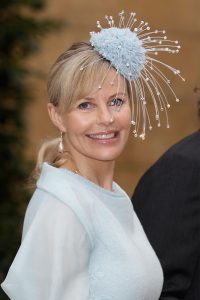 PRINCESS KATHARINA NINA VON HOHENZOLLERN
Katharina paired her whimsical design with a sheer blue dress for the wedding of Georg Friedrich Ferdinand Prince of Prussia to Princess Sophie of Prussia in 2011 in Potsdam, Germany. 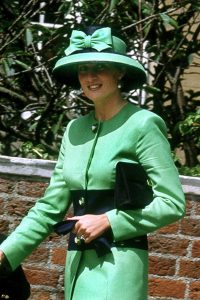 PRINCESS OF WALES
Princess Diana wore what looks like a wide-rimmed hat with a giant green bow on top to Windsor Chapel for the wedding of Lady Helen Windsor and art dealer Tim Taylor in 1992. It reminds us of the hat Julia Roberts wore to the race track in Pretty Woman. 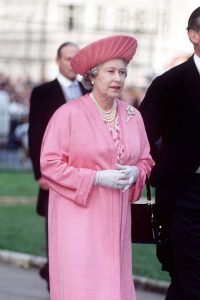 QUEEN ELIZABETH II OF ENGLAND
The Queen wore an all-pink outfit for the wedding of Viscount Linley and Lady Serena Stanhope in London in 1993. The pleated brim of the hat makes it seem bigger and steals attention away from her outfit. 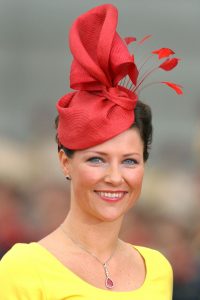 PRINCESS MARTHA LOUISE OF NORWAY
For the Spanish royal wedding of Prince Frederik and Princess Mary in 2004 at the Almudena Cathedral in Madrid, Princess Martha Louise wore a vibrant cocktail piece. Not one to shy away from color, she paired the hat with a bright yellow dress and stunning ruby necklace. 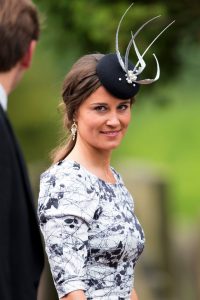 PIPPA MIDDLETON
Kate’s younger sister attended the wedding of Lady Melissa Percy and Thomas Van Straubenzee at St. Michael’s Church in 2013 wearing a piece designed by Olivia Roat Millinery, which kind of reminds us of antlers on a deer. Her dress was by one of her favorite designers, Tabitha Webb. 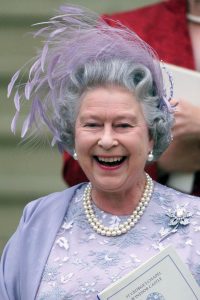 QUEEN ELIZABETH II OF ENGLAND
Queen Elizabeth II matched her violet purple dress with a stunning purple feathered casque for the wedding of Sophie Rhys-Jones and her son Prince Edward at St. George’s Chapel in Windsor castle in 1999. The soft purple blended nicely into her stunning silver hair. 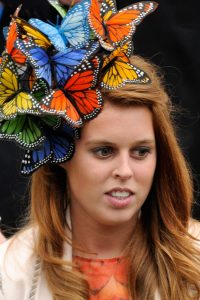 PRINCESS BEATRICE
Beatrice unsurprisingly wore another bold hat to the wedding of Peter Phillips (the son of Princess Anne and Captain Mark Phillips) and Autumn Kelly at St. George’s Chapel in Windsor Castle in 2008. The multi-colored butterfly fascinator by Philip Treacy matched her rainbow-hued dress 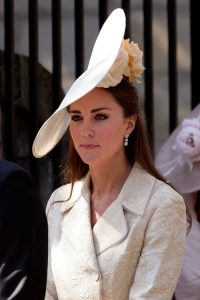 DUCHESS OF CAMBRIDGE
The always-stylish Kate Middleton went with a floral adorned headpiece for Zara’s wedding, which looked like a plain ivory hat from one side, while bouquet was bursting from the other. 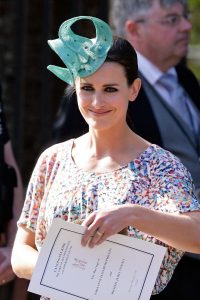 KIRSTY GALLACHER
As for TV presenter Kirsty Gallacher, her outfit for Zara’s wedding included a multi-colored dress, nude heels, and an unusual jade fascinator with teal sequins stitched into ribbons of fabric. 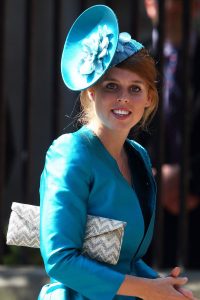 ​PRINCESS BEATRICE
Beatrice also attended Zara’s wedding, which took place just three months after her iconic O hat moment. For this occasion, she went with a teal topper that many said resembled a satellite dish with flowers on top. We can’t say we disagree. 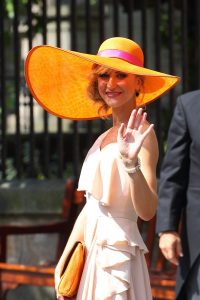 KATHERINE KELLY
Soap actress star Katherine Kelly attended the royal wedding of Zara Phillips and Mike Tindall in 2011 in an asymmetrical orange and pink number by H’atelier that stood out against her pale pink dress. 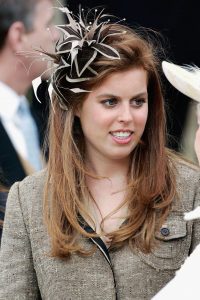 PRINCESS BEATRICE
Beatrice attended the wedding Prince Charles and Camilla in a fascinator featuring what looks like two brown silk lilies that blend into her auburn hair. Known for her outlandish hats, this is a rather subdued look for the princess. 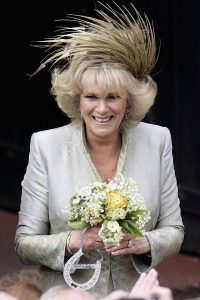 THE DUCHESS OF CORNWALL
Camilla Parker Bowles, the wife of Prince Charles, wore an outfit by Anna Valentine on her wedding in 2005 at The Guildhall at Windsor Castle in Berkshire, England. To complement the outfit, she wore a spray of golden feathers created by Philip Treacy, instead of a traditional tiara. 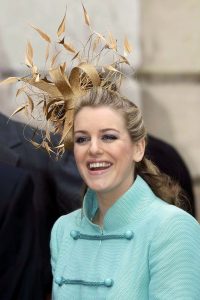 LAURA PARKER BOWLES Laura attended the civil ceremony of Prince Charles to her mother, Camilla, in a fascinator with a gold bow and leaves that look like they are floating over her head. This headpiece was a more youthful take on her mother’s for the occasion. 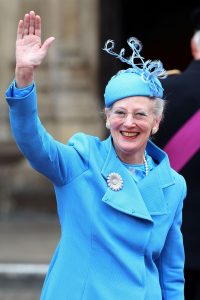 QUEEN MARGRETHE II OF DENMARK
The Queen of Denmark attended the wedding of Prince William and Kate in an all-blue ensemble, which was apparently a popular color that year. She paired it with a tiny chapeau-style hat donned with swirling feathers on top. 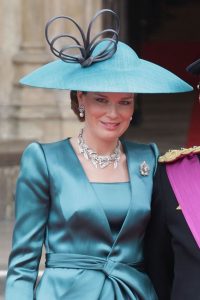 PRINCESS MATHILDE OF BELGIUM
Princess Mathilde of Belgium, the wife of the heir to the Belgian throne, wore a structured teal picture hat by Philip Treacy to the wedding young royal’s wedding. Her matching Armani dress helped her stand out amongst the crowd. 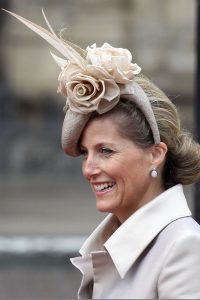 COUNTESS OF WESSEX
Queen Elizabeth’s daughter-in-law Sophie Helen Rhys-Jones wore a chapeau in an understated color that complimented her elegant coat to the royal wedding. However, the abundance of feathers and silk roses ensures her headwear did not go unnoticed. 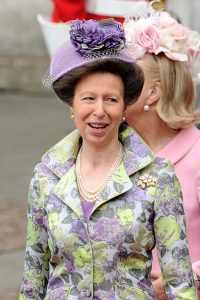 PRINCESS ANNE
As for the younger sister of Prince Charles, Princess Anne, she wore a floral outfit with what looks like a flat headpiece covered in netting and lavender flowers to her nephew’s wedding. 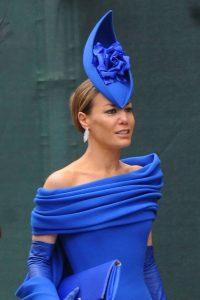 TARA PALMER-TOMKINSON
Socialite Tara Palmer-Tomkinson (and long-term friend of Prince Charles) also wore a Philip Treacy hat for Will and Kate’s wedding, but this time in an electric blue with a rose inset. She paired it with a matching dress by British fashion designer Deborah Milner. 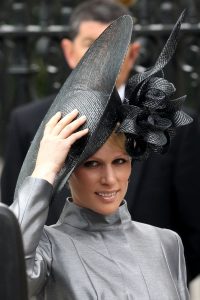 ZARA PHILLIPS
The daughter of Princess Anne and Captain Mark Phillips attended her cousin William’s wedding in a Philip Treacy outfit and slanted fascinator, complete with an enormous flower detail on top that felt traditional, yet statement-making. 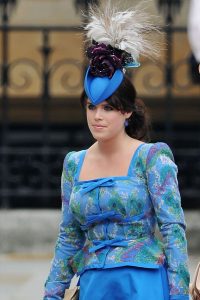 ​PRINCESS EUGENIE OF YORK
As for Beatrice’s sister, Eugenie, she too went all out with an electric blue hat featuring dark purple flowers and feathers. Her headpiece complimented the floral Vivienne Westwood suit she picked out for the occasion. 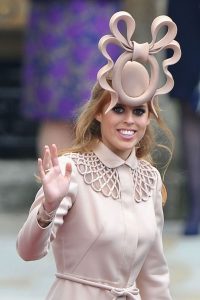 PRINCESS BEATRICE OF YORK
At the royal wedding of Prince William and Kate Middleton in 2011, Will’s cousin, Beatrice, wore the most talked-about hat of all. She paired her Valentino coat with an enormous taupe O with a bow on top. It garnered so much attention that she later sold it on eBay and raised $130,000 for charity.